In this article we discuss the various techniques related to crib molds.
Crib molding technique

Ancient technique and simple execution, consisting of elementary passages, executed with specific tools such as plaster, latex or clay. The artists prefer it to get perfect copies such as low reliefs, sculptures but also parts of the human body. Here is what you need below

Consider that the mold faithfully reproduces the mold of the selected subject “in negative”, therefore you will have to opt for a modality that allows your subject to remain impressed on the material that you yourself will choose. Of these materials, there are different types, such as soft plastic or clay, all materials specifically designed to be removed, both from the subject and from subsequent works, having had an appropriate regard for not damaging in any way two subjects. At this point, you should get the cast of a figurine and, for a purely practical matter, leave out the normal plaster cast and perform it with a special silicone rubber that will allow you to get your mold in half an hour. To start with, once you get the gum, you’ll have to make a container in which you’ll go to perform the actual cast. Subsequently, this container must be large enough to contain the entire subject of which you will make the cast and seal, so as not to allow the escape of the rubber material.

Plaster molds for the nativity scene

The most effective and simple technique, therefore also suitable for beginners, is that of silicone or clay or mastic molds. There are two types of molds; the one in the round or the mono-facial. The first relate to the creation of a figure in the round, as can be a figurine of the crib, the second instead concerns a frieze, a street, a bas-relief. Molds are very useful when it is necessary to reproduce a quantity of pieces of the same size, or to create streets, roofs in which an element (bricks, stones, tiles) appears many times in the structure. Molds are generally used for mold-specific silicone. On the market it is possible to find different types, depending on the quality of the mold and the finishing of the details of the model. The silicone for molds marketed is usually a two-component, a material that requires a reagent to activate and harden. With this type of silicone molds can be made, from a model, very refined. The details are very detailed and the copy is faithful to the original. This type of silicone is used, for example, with statues and details that contain arduous areas to reach, the so-called undercuts. The undercut can be an arm that falls along the body that gives rise to a half-hidden part, particularly difficult to reproduce. The drawback of the silicone for molds is economic, in fact it has a very high cost, given the specificity of its function. I advise beginners not to use silicone, then use it in specific cases. On the market there is a common, cheap silicone, used in hydraulics and a technique in which clay, or mastic is used, as a work base. First you need to have a model on which to make the mold, the model can be retrieved from an artist, a specialized store or in markets like the one in Naples. Once the model has been found, work continues. In the example it is proposed the realization of a Corinthian capital in the round. With this type of silicone the mold will not be perfectly defined, many times it will be necessary to finish the replica to remove the impurities present. The piece is placed on a base with the head turned upside down, the silicone is placed in several layers on the surface, paying attention to the perfect covering of all the parts of the model, we can cover it perfectly thanks to the use of a spatula that will make our work easier. Choosing the position on which the model will be placed is a fundamental operation, because the part that rests will be the hole from which to make the plaster come out for the mold. Once the mold is completely dry, it looks like the second photo. To facilitate the extraction from the base a transparent film is used under the base which will be subsequently eliminated. 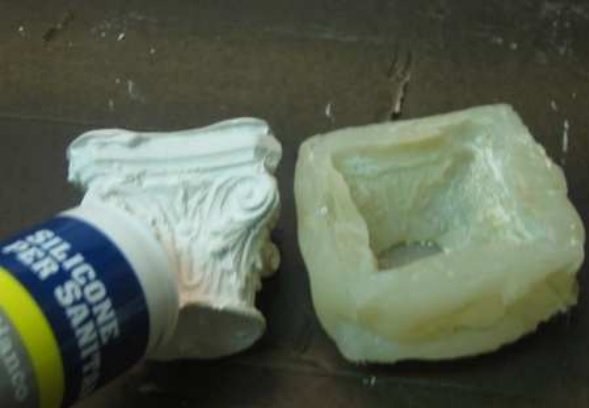 At this point, you can proceed with the preparation of the plaster with a fairly liquid consistency and free of lumps, which will be poured into the mold. In the figure the mold has the opening as it was positioned at the beginning of work, in the subsequent images we see the pouring of the liquid plaster, subjected to manual movements to eliminate the bubbles formed. Once the plaster has dried, all that remains is to extract the product gently, we will obtain a faithful copy of the original model.

In the figures above examples of molds and finished products. The mold with specific silicone for molds is more refined than the previous one, the work, in this case, involves the production of a structure containing the silicone since the preparation for the mold is generally very liquid. The technique is very similar to the previous one, but instead of using commercial silicone for hydraulic applications, we opt for the specific one for molds. In this case a box must be made where the model remains (a Corinthian capital in plaster sectioned into two parts).

The model is placed gently in the box, selecting the position in relation to its shape. The silicone should be poured inside, covering the entire model at least one or two cm (depending on the size), leaving space between the edges of the box and the model. The part that rests will be the opening that will allow the casting of the plaster.

Another technique for printing one-sided models involves the preparation of a structure with wooden rods that contains the mold to be made, applying a transparent film on the base. You need to have some mastic or clay. The aforementioned rods will be used to create the base for the realization of the mold. Finally, the technique involves applying the clay inside the base, paying attention to the total coverage of all the holes or spaces.

In the figure the mastic or clay ready to be laid on the base for the mold.

To build a Roman road, a small roof or brick, it will be necessary to obtain stones of various sizes and exert a slight pressure on the surface, to create fingerprints.

To make bricks, we will use a wooden strip that we will press on the surface to obtain the shape of the bricks. for the reproduction of a small roof, we will use the base of a brush, and exert a slight pressure. Thanks to the experience, then the techniques will be understood to obtain optimal and satisfactory results. To make work easier, you can remove the wooden strips, which will then be repositioned.

Prepare the liquid plaster, but not excessively, avoiding the formation of lumps, pour it inside the mold, not before having fixed the strips and having appropriately covered the corners to prevent the liquid from escaping. To strengthen the structure, jute, wadding or gauze affixed to the back of the cast is used, when the plaster begins to solidify. The aforementioned materials must be applied when a layer of plaster has already been poured, otherwise they could move from the surface to the front, the visible and usable one.

The image illustrates the mold with the plaster during the drying phase, to avoid the formation of bubbles, tap it to make the impurities appear.

The plaster can be easily sectioned and shaped for the desired needs. This technique is used to create one-sided molds and cannot be used for all-round molds, for the latter it is necessary a very different technique that sees the use of material such as clay to create the figures. It is the typical technique of the Neapolitan school for the creation of the characters that extends also to the creation in series of artifacts. 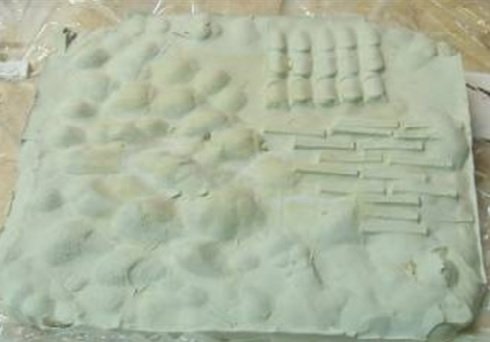 In the image a Roman road built, in pieces with the technique described above, in the other photo tiles made in mold. This technique for the tiles involves the production of very similar pieces that will be put together later. For this reason the rule sees the production of the first pilot piece, trying to reproduce it in the best possible way and then reusing it several times as a positive mold model. In this way, faithful reproduction is assured. 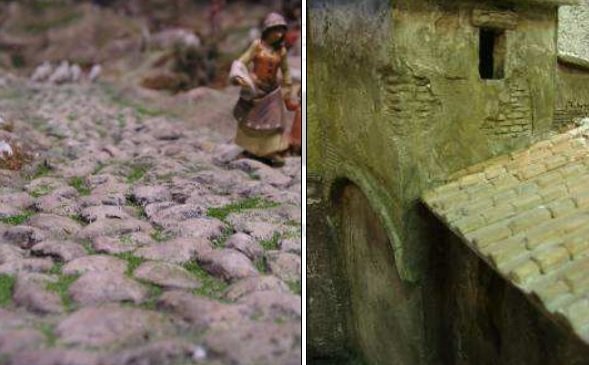 If you do not have a model of the required size or invoice, you will need to make one, shaping a piece of DAS. This operation can be difficult for those who are not practical, but at the same time are highly formative. As in the case of the previous photos, these works are made by printing models created by hand.

Capitals and other elements made with the described mold technique.

Some Product from the shop
X