In this section I will describe how to obtain natural lighting, such as to simulate the most suitable sunlight for nativity scenes with static lighting, the aforementioned technique will be applied to works such as dioramas, or crib scenes.

Each crib needs its own light in relation to the scene represented, the time of day to be reproduced and the environment to be represented. For the design and construction of an electrical system, we must have some general knowledge in the field of electricity (use of various voltages, series or parallel connections, lamp power, wire sections, use of transformers, etc.) ). Pay attention to the arrangement of the light sources, they must not be near to sources of water, flammable parts, since it can be dangerous for one’s own safety and that of others.

Various types of lighting devices can be used such as:

General lighting of the crib scene

Although even a single bulb is sufficient, I recommend using several, with lower power, to obtain a more homogeneous result. The lamps must be placed in the highest areas, not visible to the eye of the observer. Better to avoid the unsightly shadows on the sky, placing a number of small power lamps near the background, disguising them so as not to illuminate the first floor.
These lamps must be colored and can be adjusted with special devices, if you want to reproduce a particular time of the day.

once the general lighting has been completed, the nativity scene is continued, for this reason projectors are needed and it is necessary to avoid illuminating the group in an exaggerated way so as not to run the risk of reducing the beauty of the scene. Of great importance is the position covered by the light source, the light entering from the landscape must come from the same direction and must not interfere in the cave or in the hut. 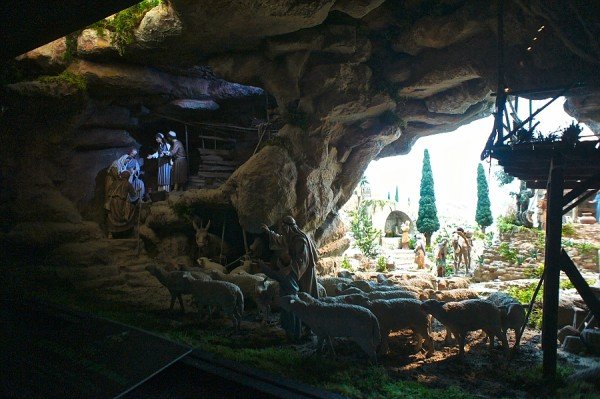 It is obtained with lamps wisely concealed using measured light and avoiding jarring color combinations. It could be enough a light bulb or small bulbs (called “peas”) that hidden in natural cracks created by us, illuminate our crib. 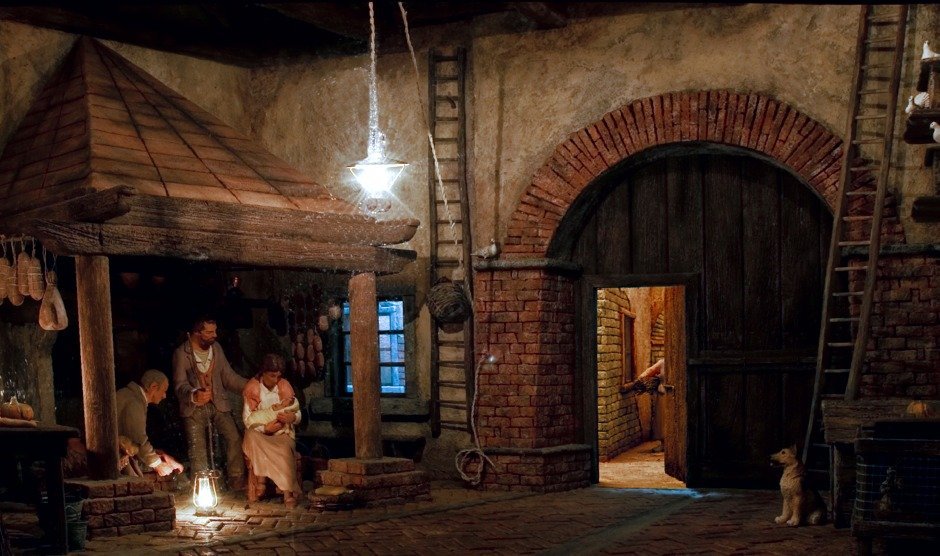 For further information, video lessons with excellent quality audio and video, easy and intuitive explanations, I recommend buying my DVD VIDEO CAMERAS, suitable for both beginners and medium / advanced level cribs. To faithfully reproduce all the phases of the day, we can make use of: an ELECTRONICS, a DIGITAL, a MECHANICAL, and a … NATURAL control unit. The ELECTRONIC control units allow you to set different parameters to the scenes without great difficulty and have the ease of starting the day’s cycle with a switch, in the event of a power failure it restarts automatically and the cycle starts again. The DIGITAL control units are managed by a computer or a microprocessor; here we can completely or almost completely customize all the settings, just use a software (program) and the hardware (the power circuit), the cost could be lower than that of the electronic control unit; a disadvantage of the digital control unit is that to turn on the crib it is necessary to start the computer and the operating system and then load the program so that the crib starts its cycle. In case of power failure it is necessary to restart everything manually. To use the MECCANICA control unit, on the other hand, a minimum of knowledge of electricity and a bit of imagination is sufficient, essentially consisting of a mechanical system supported by an electric motor that operates levers or electrical contacts.

The difficult element to illuminate is the backdrop, to obtain a uniform and free of haloes or smudges (strange lights on the background scene), it is not child’s play. If the lights of “Full Day” do not involve big problems, those of “Alba” and “Tramonto” are the most critical, in fact if you illuminate the seabed afterwards the same will become a diffuser screen to the advantage of the lights in general, which will be very soft ; in the specific case of Dawn and Sunset, we will obtain more natural shades, thus avoiding compromising with unwanted lights. the background scenography. If the backdrop is illuminated from the front it is necessary to pay particular attention to the “Alba” and “Tramonto” light adjustment, which I recommend to place between the last set (usually mounts) and bottom using lights of low power (from 10 to 25 Watts. As for the colors of the lamps, we must rely on experimentation, in the sense that the best result is obtained with repeated tests, however in principle, for “the Alba you can use orange and blue lights for example; while for the “Sunset” red and blue, well-dosed, to obtain an optimal effect.

As for the Nativity scene, I recommend a SPOT that can only illuminate that scene in the “Night” phase, as it is the only scene NEVER to be in the dark, and at night it must be illuminated precisely in a circumscribed way to avoid illuminating the rest of the crib. Another fundamental note is that of correctly adjusting all the “Day” and “Night” phases, and here are some important aspects to keep in mind: we are in winter; the sun rises at about 7.00 and sets at around 18.00, so we have only 9/10 hours of light, and around 14 at night, we consider that a day / night cycle should last a maximum of eight minutes, (I do not recommend a longer time to avoid becoming impatient) the visitor), then we will have three minutes of “Full Day” and four of “Night”, keeping in mind that in the three minutes of “Full Day” we have the phases: “Alba” and “Tramonto”, calculating that in nature last about half ‘now, on balance in the crib should last about thirty seconds. The NATURAL control unit is the most realistic and economic of all, the only disadvantage is the duration of the cycle, making an outdoor crib there is no need for any technology to adjust the phases, but only some light placed in the right place (remembering always to illuminate the “Nativity” as explained above), all operated by a photosensitive cell which, adjusted appropriately, turns on and off the lights independently.

Lighting of a diorama

The meaning of the term diorama derives from the Greek and literally means “through the view”, that is to say the faithfully reconstructed vision of a certain scenario. The diorama is something alive, of palpable that transports us looking at it, within the scene itself reconstructed, making sure to be together with the characters and the scene. This technique originates in Spain, precisely in Barcelona, at the beginning of the last century, now it is admirably revived by Italian and Spanish masters. 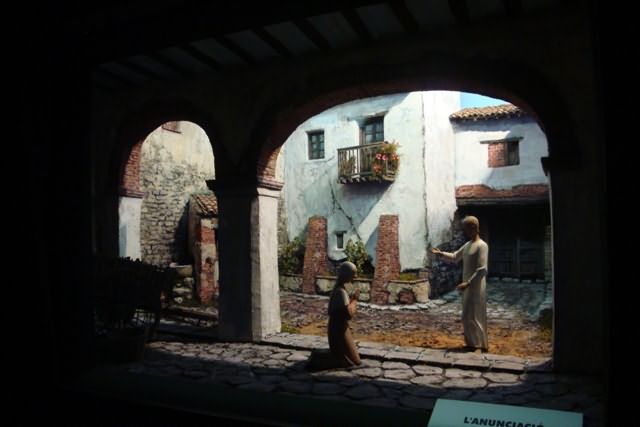 To remember, Romagosa, Pigozzi, Mattei and Bombelli, Storti and of course Fabio Modeo with great satisfaction. For the realization of a diorama it is necessary to design all the aspects including that of the fundamental lighting to make the scene realistic. In fact we should simulate the light of the sun and its effects on things and materials and this can be done first by following the canons of perspective also using these concepts in the lighting of the scene. We first report on some crib scenes that will give you an idea of what you intend to do. 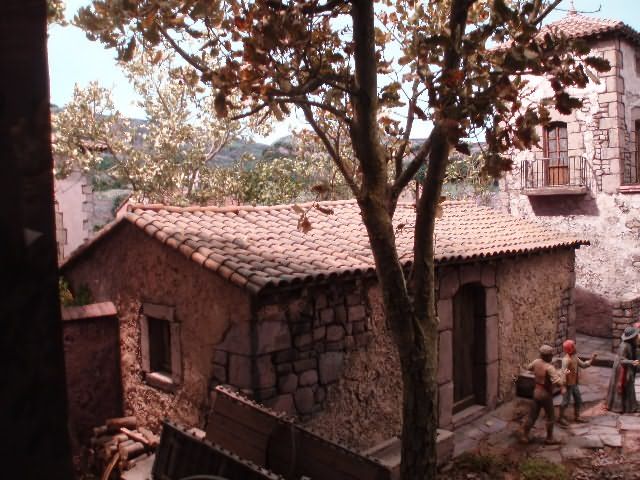 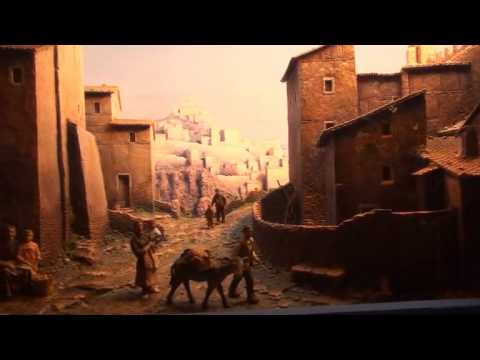 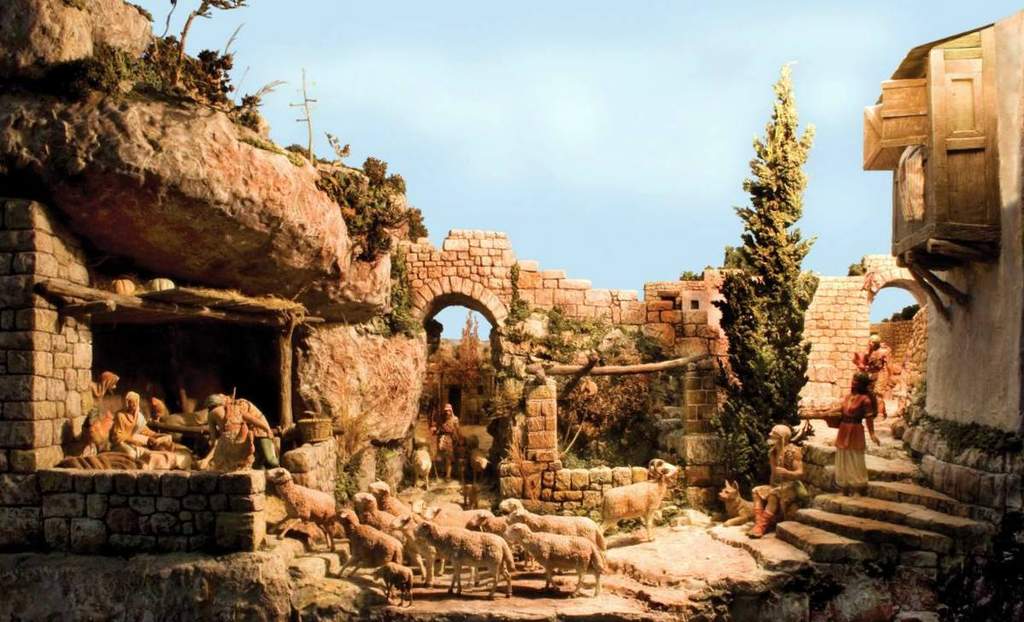 The light is the protagonist in scenes of this type and contributes decisively to the beauty of the work. 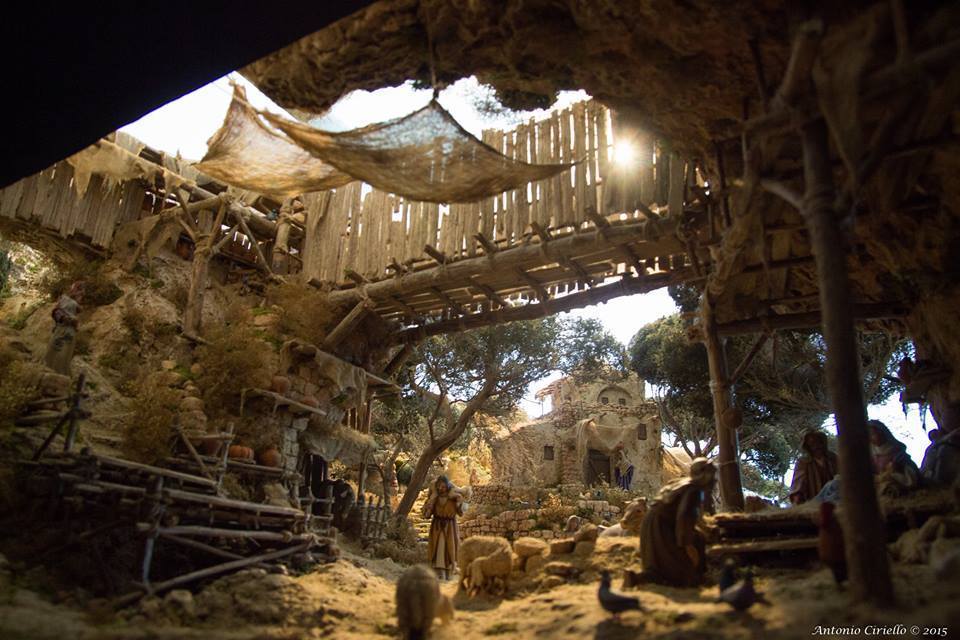 You start with a project and build a base and start designing a draft. The first thing to do is to place a spotlight or a bulb, proportionate in power in relation to the size of the work, in a certain position selected even taking into account the position of the nativity. The light point can also be made up of several lamps, the essential being that the effect is to simulate the light coming from a precise side. The light must necessarily illuminate the nativity, therefore it must be positioned on the side of the crib, from which it can be illuminated. Here is a possible outline that could be useful to you. 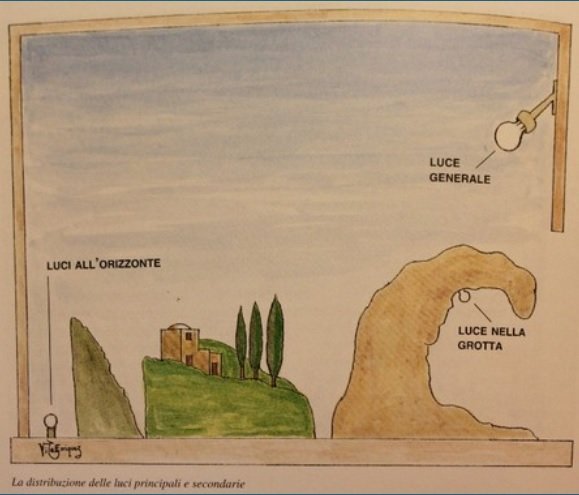 In the preceding images the light comes, in a dominant manner from a single position. This simulates the sunlight that comes from a point and immediately creates a different depth effect, compared to that obtained by a homogeneous light on the whole crib. From the previous photos we note the creation of shadows and light cuts that make the scene certainly more suggestive and less obvious. 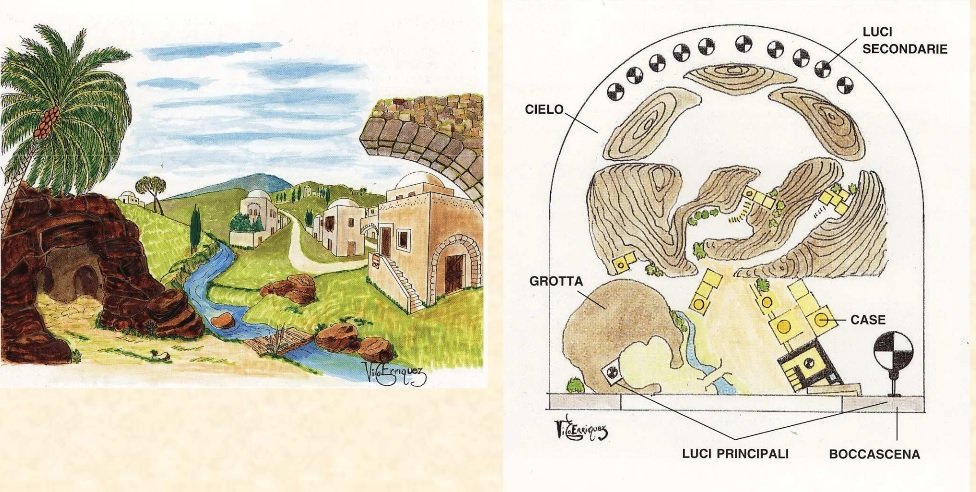 After all, in reality there are always shadows and more or less illuminated areas. If we note that the effect remains too accentuated, leaving too much shaded areas, then it is advisable to add additional supporting lamps but with less power. They are used in the case of neon lamps, with diffused light that make the shadows softer and eliminate the annoying and unnatural ones. The scene that we reproduce must necessarily be fixed lighting. This lighting must be present from the beginning of the work, to allow the construction of a work in which lighting, volume and coloring are harmonious. In coloring, the effect of the lights is fundamental, since the colors vary according to the light used, as well as the shadows that originate from the same light. Place them as high as possible, to avoid the shadows of houses on the sky or in the mountains in the background. Behind the mountains to simulate the effect of the reverberation that produces a certain brightness behind them, it is necessary to place appropriate lamps at a distance of about 5 – 10 cm between the bottom and the mountains of the top floor. 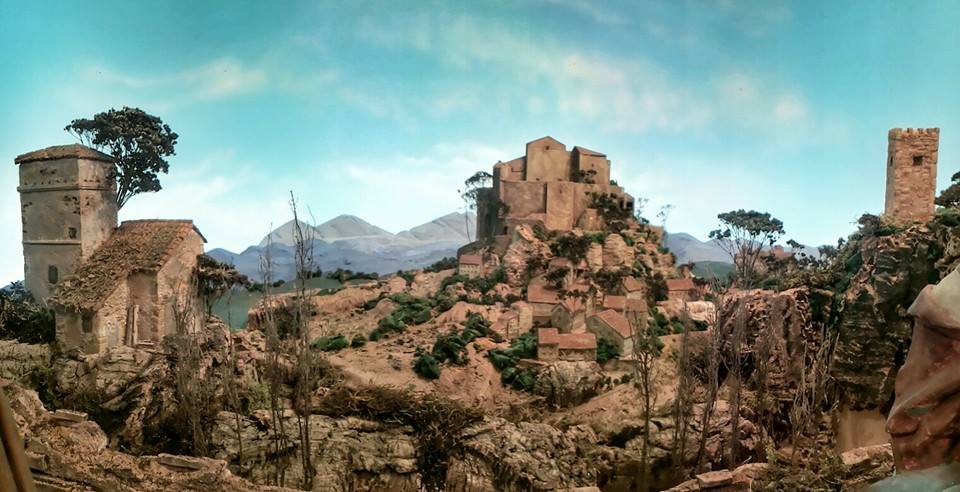 Alternatively, tubes like those used for Christmas lighting are used, which can be easily positioned, because they are flexible and in modules, or, as in the Spanish tradition, small plaster plates that reflect the light coming from above and reflect it on the sky background. You can also use filament lamps or small neon lights which can be modified to make it more natural. 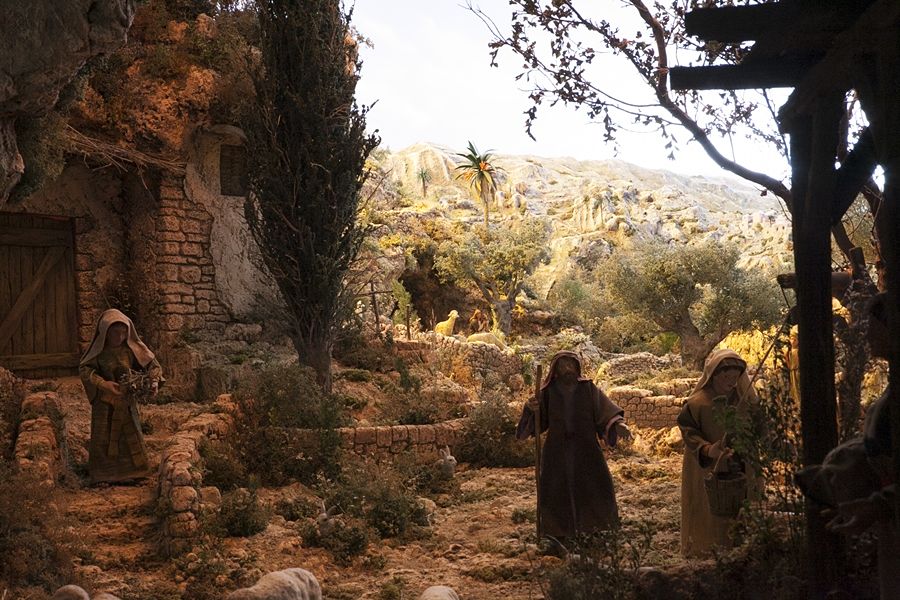 In the images some examples where the effect of the described tips is evident. The background is made with plywood or plaster in special cases, the shape is always the usual arched with rounded corners. There is the possibility of creating a dome-shaped sky. We show in the following picture a very curious and fascinating aspect of this technique. The shade that can be seen in the photo, partly originates naturally from light and partly is forced with color. In fact, the part in shadow is not colored like the part in light. The shades of blue and gray are forced to obtain movement and a mystical sense. to make it even more eventful and intriguing. In the case of large-sized cribs, the lighting must be carefully designed as part of the drafting of the project, otherwise you risk flattening all the work with poor lighting.

Some Product from the shop
X